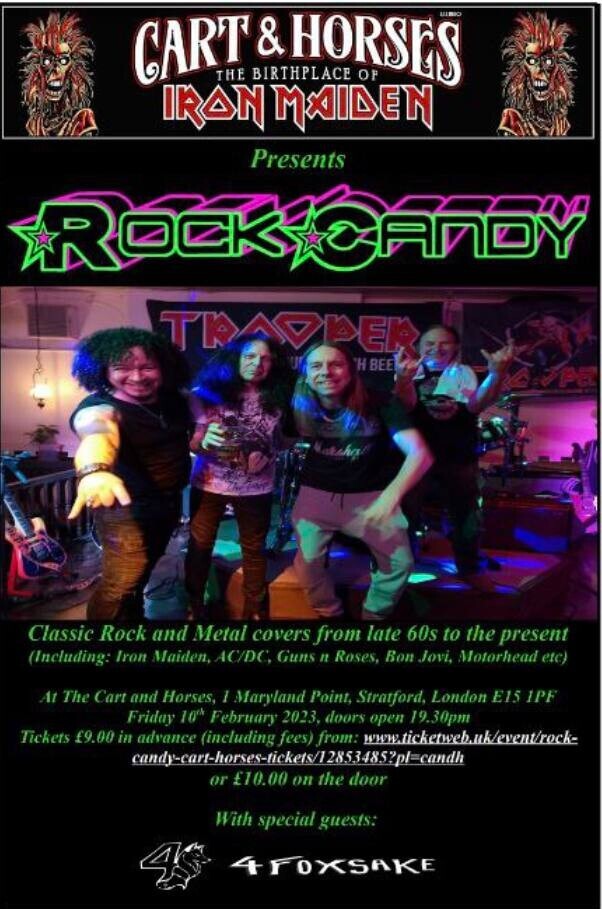 Rock Candy... are a rock covers band playing kick ass Rock and Metal songs from the late 60s up to the present day (Iron Maiden, AC/DC, Guns n Roses, Bon Jovi, Motorhead feature in their set).
Rock Candy was put together by Paul Lewis, lead guitarist of legendary NWOBHM band "Satans Empire". Rock Candy are: Rod Rivers on Lead Vocals and Guitar (an outstanding Vocalist who nails all those big songs), Paul on Lead Guitar and backing vocals, and, a killer rhythm section of Phil Toombes on Bass and backing vocals and Pete Cowan (who many of you will know from "Metalworks") on Drums and backing vocals. The band's aim is to make every gig a big Rock n Roll party, so, fasten your seatbelts for some full on rockin mayhem.
4FOXSAKE... A voice for the unsung, 4FOXSAKE is a Hard Rock band based in London UK putting out loud anthemic music devoted to challenging social norms. 4FOXSAKE's music of punchy riffs and catchy choruses expresses the adversity and disillusionment the band members faced as young adults. Shutting off the noise from outside, the band's explosive music explores the urge to fight and overcome entrenched social barriers through sheer will and determination.
Tickets:
£ 9.00 in advance (including booking fee),
www.ticketweb.uk/event/rock-candy-cart-horses-tickets/12853485
or £10.00 on the door / Age 18 +