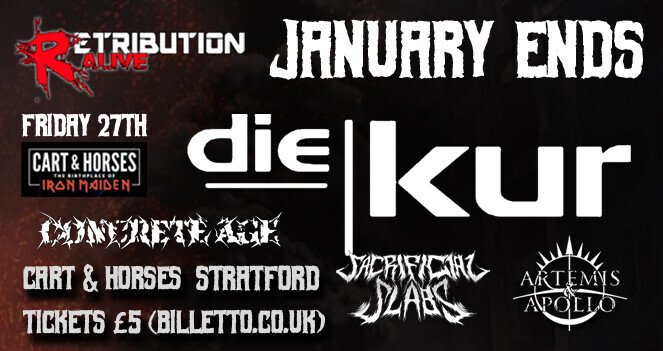 Retribution Alive kicks off 2023 with 'January Ends', a 2-night celebration of the end of the worst month of the year! As tradition dictates, the almighty DIE KUR headline their ninth January Retribution Alive in a row (and their twelfth London January show in a row)! Joining them on Friday night at the Cart & Horses, Stratford we have CONCRETE AGE, ARTEMIS & APOLLO and SACRIFICIAL SLABS
Tickets: bit.ly/3I40cuE
Weekend event: www.facebook.com/events/1893029767702788
DIE KUR
Industrial Metal band from London, making their ninth January headline appearance at Retribution Alive, for the 9th year in a row - IT'S TRADITION!! They've done the Intrepid Fox, 12 Bar, Unicorn, Electrowerkz, The Dome, The Dev, online, Nambucca and now... the Cart & Horses (+ The Dev)!
www.facebook.com/DieKurOfficial/
CONCRETE AGE
Concrete Age is an Ethnic Death/Thrash Metal band formed in October 2011 in North Caucasus (Mineralnie Vody city). In November 2014 the band was relocated to London. Our project is based on different ancient cultures from all over the world. During our live performance, we use ethnic instruments and mix them with metal.
www.facebook.com/concreteage
ARTEMIS & APOLLO
Symphonic metal project based in the United Kingdom.
www.facebook.com/artemisandapollometal
SACTIFICIAL SLABS
Death/grind band from London, with a little twist.
www.facebook.com/sacrificialslabs
DJs 69 and Griffin (Retribution Alive / Bloodstock) + guests
Sign up
for news, offers and events