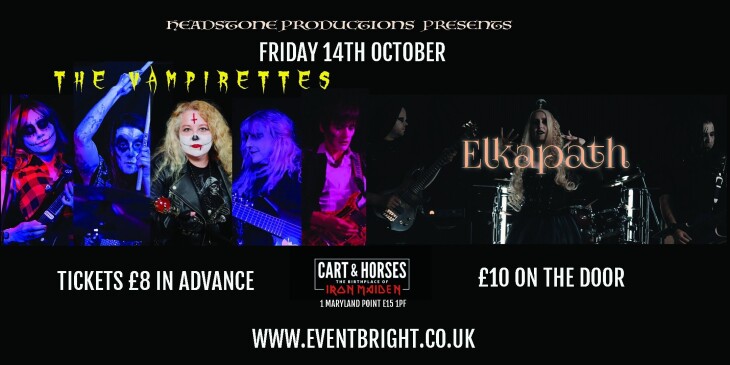 Headstone Productions are proud to present another night you won't want to miss!

The Vampirettes bring their brand of undead rock to the birthplace of Iron Maiden, plus Synthetic Gothic Metal band Elkapath, all the way from Gloucester.

Doors 7pm.
8:30pm - Elkapath
Described as 'unique' 'sublime' and 'haunting', this is a band to watch out for.
9:45pm - The Vampirettes
'Motorhead meets the Shangri-Las'
Presumed dead, The Vampirettes lived in the shadows, with a mere hint of their former existence surfacing now and then, and with occasional unconfirmed sightings, and very secretive nocturnal recordings with Wily Bo's 'Rattlin Bone'.
They had once been amongst the living, as 60's girl band 'The Wandettes', but disappeared after boarding a plane with their mysterious manager Rafe Tuson (Nosferatu).
In late 2020 they emerged from their crypt to bring their unique brand of undead classic rock to an unsuspecting world.
Are you ready for love at first bite?
Sign up
for news, offers and events